In this essay, I abandon Art History so I can experience anthro[physis] at Rivera Gallery without “isms” and aggrandizing.

Enter a gallery. A monocle and an art degree are not needed. Possess them however and you have an ocular and academic advantage. I pack light. I only carry the five senses—plenty for engaging any art exhibition. Equipped like so, I am ready to cut question marks out of air and churn waves out of silence.

Invite yourself into this metaphysics. Do not tell your parents (they would only worry), and do not concern yourself with analysis when viewing a painting. That is the medieval dungeon of criticism—antithetical to enjoyment—and it has its place in hard-bound books and 200-year-old halls.

But that’s not where you are. You’re in an art gallery. Treat it like a hike through the woods. You wouldn’t demand the sunrise to explain itself. The scent of pine needles is not up for debate either. You’re stepping through poetry simply because you can, and when I’m walking through anthro[physis] at Rivera Gallery, I’m doing the same.

In Claire Morgan’s “Clearing,” I dive deep. I leaf through a catalog of associations—whatever my senses decide. I do not direct them. I encounter a matrix, a cube, manifold mathematics. I witness an outer space circus. I wonder what this fortress is, what gold is guarded inside, and I wonder what the hedgehog would say; this is the canopy for his deathbed. There’s science at work here and it’s without laboratory equipment. I can’t talk to the Irish artist who invented this. She’s not here. But I can talk to the suspended shapes—the ones, that like summer clouds, take whatever form I fancy. I perceive the angelfish, the frog, the jellyfish, the seahorse, the griffin, the flea, the lion, the walrus making out with a dolphin. I perceive their evolution from protozoa to personal madness.

But I can do more than palaver with plankton. In this exhibition room, I face a seven-foot doorway and where it leads is an unconscious asylum. This portal is the oil painting, “Blue Willow,” by Los Angeles-based Robert Standish. Realism reigns. Elements are cosmic. “Blue Willow” pulls on me, rips mythologies from my bone marrow. With daylight lynched, I walk on sprouted sadness. I hear one good lie. I taste ancestral night. The shadows marry without ceremony.

Because it’s all ceremony in the end, all ritual—that’s what art is—the ritual of being human. The others of anthro[physis] also participate in this custom.

Jason deCaires Taylor is one of those guys—you know—that guy who sinks 403 life-size sculptures to the ocean floor and then attracts National Geographic, CNN, and the BBC. We all know a guy like that. Or maybe we don’t. Well, you know his work now. Taylor populates the sea with it. For this exhibition, he could not dredge his installations and neither could he turn West Hollywood into Atlantis to display his craft. Rather, he brings photos of his creations like Silent Evolution and Inheritance. Glimpse these windows and see that his art is alchemy; the water is air; the ocean surface, the stratosphere; characters sleep as fish zoom past them.

Levi van Veluw is another artist who appreciates human scale. His meditative men are of these proportions. His element is not water however, but wood—tens of thousands of pieces of which construct cells of sobriety. The Dutch artist has done this for a purpose I will not inquire and I will not imagine in this essay.

I have said so much already—some might say too much.

A definition is a guillotine.

To make plain what is divine is to collapse the stars and call them Christmas lights.

For this reason and more like it, I eschew formal art criticism. I rarely weaponize my words, because I once did as a film critic for The Daily Californian in Berkeley and The San Francisco Bay Guardian. Like my peers, I found easy targets and like my peers, I catapulted cruelties from the safety of a keyboard, earning paychecks by way of vituperation.

My arts writing now orbits accord and progression. I share my impressions but without legislation. I trust you will find your own meaning. I know you will. The other participants of anthro[physis], Néle Azevedo, Vaughn Bell, Robert Cannon, Aharon Gluska, and Yuriko Yamaguchi, should trust you, too, because you have what I have—the five senses—all you need in art gallery.

Keep the monocle at home.

Save it for Monopoly night.

Move with Accord Progression 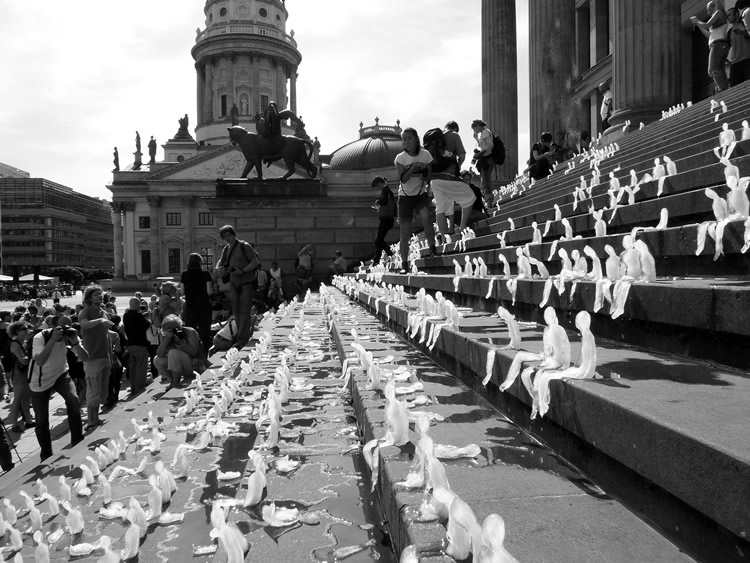 “Origin of the Beginning 1.2” by Levi van Veluw